On July 15th, 2017, around 3 PM, I walked along the trail leading to the Cooper’s Hawk nest. The first fledgling I saw was the youngest looking.

The youngest looking fledgling. It had the most white downy feathers on its face.

On a different perch 7 minutes later. I think this is the same bird, based on the white downy face feathers.

Another fledgling, of seemingly intermediate maturity (less remaining white down than one sibling but more than the other), was calling its parents repeatedly, because it was hungry, or because it was not comfortable with my presence. It called and called, and occasionally its siblings called too. That was how I located the third sibling. 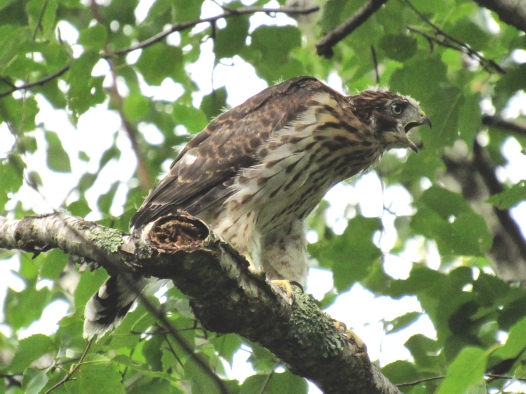 The second fledgling looks a bit like the first one in this photo. But on close inspection, the band of white down over the eye is much thinner.

My photos of the third youngster lacked colour vibrancy but had nice tonal contrast, so I played with a black and white edit.

Well, that was exciting! Three fledglings!!! And then I wondered… how many days usually pass between when a Cooper’s Hawk egg is laid and when a flegdling leaves the nest?

A female Cooper’s Hawk usually lays one egg every 2 days. She starts incubating the eggs after she has laid 3, though she may lay more. After 34-36 days of incubation, the chicks hatch, altricial and covered in natal white down. The first 3 laid eggs hatch on the same day, while later eggs hatch at the same intervals that they were laid. Chicks are not usually visible by ground observers until 7-10 days later. At 10 days, the chicks are covered in new longer, fluffier white down. At about 11 days, the feathers begin to emerge from their sheaths and at 21 days, small dark brown rectrices, remiges and scapular feathers are visible.

Adult Cooper’s Hawk males weigh about 30% less than females. Consequently, it takes more time for female chicks to reach fledgling weight than males, so males fledge sooner. In New York state, fledgling ages of about 30 days for males and 34 days for females were observed. Slightly younger fledgling ages have been noted in western North American birds, which tend to be smaller.

The information above is from these sources:

The Photographic Guide has lots of super cute photos that show the various stages of development of nestlings. Highly recommended!

I’m going to guess that the older-looking fledgling was a male and 34 days old (I may be wrong). Continuing my little guessing game: the younger looking fledglings are females and also 34 days old. This means that when I saw the nestlings on July 5th they were 24 days old, on June 29th they were 17 days old and on June 27th they were 15 days old (the first day I saw fluffy white down protruding from the nest). So June 12th is my Hatch-Day guess. May 14th was the first day I saw Mrs. Cooper on her nest, 29 days before hatch day. So maybe Mrs. Cooper started sitting on her nest as early as May 7th (for a 36 day incubation period).

Compared to the photos in the Photographic Guide, the nestlings I photographed on July 5th look younger than 24 days and the ones I photographed on June 29th look younger than 17 days, so maybe the July 15th fledglings were a bit younger than 34 days? Not much younger though. Regardless of how old the July 5th nestlings were, isn’t it amazing how much they changed in just 10 days? They barely had any feathers on July 5th and on July 15th they were way bigger and could fly awkwardly to branches on nearby trees.

Egg laying: first or second week of May
Start of incubation: between May 7 and May 14
Hatch day: between June 12 and June 16 (June 16th if the July 15th fledglings were 30 days old)

Mrs. Cooper says “hi” and would like to remind everyone that her rear talons are even longer than her front ones. 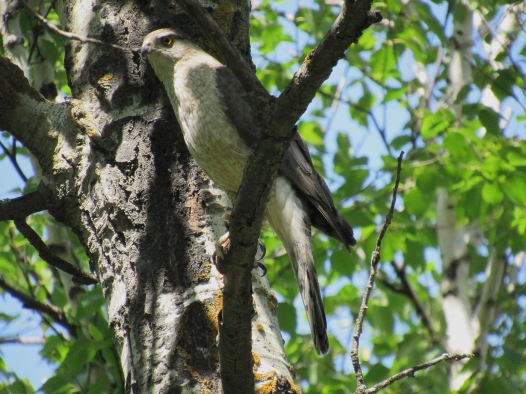