A little recap… Gwyndolyn and her goslings left the nest on May 6th 2016. For a while, George and them were the only goose family at the pond, but soon another family joined them. Part 3 ended on the morning of May 23rd, with cold rain and both mother geese brooding their goslings under their wings.

Part 4 starts a week later, on a much warmer early morning. Gwyndolyn’s goslings were already up and had apparently just returned from a swim. Gertie’s goslings were in a cuddle puddle, keeping each other warm without mama’s help. 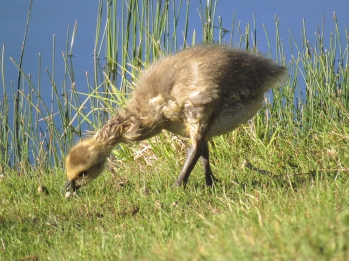 One of Gwyn’s goslings looking wet!

George, Gwyn and their gaggle of goslings. 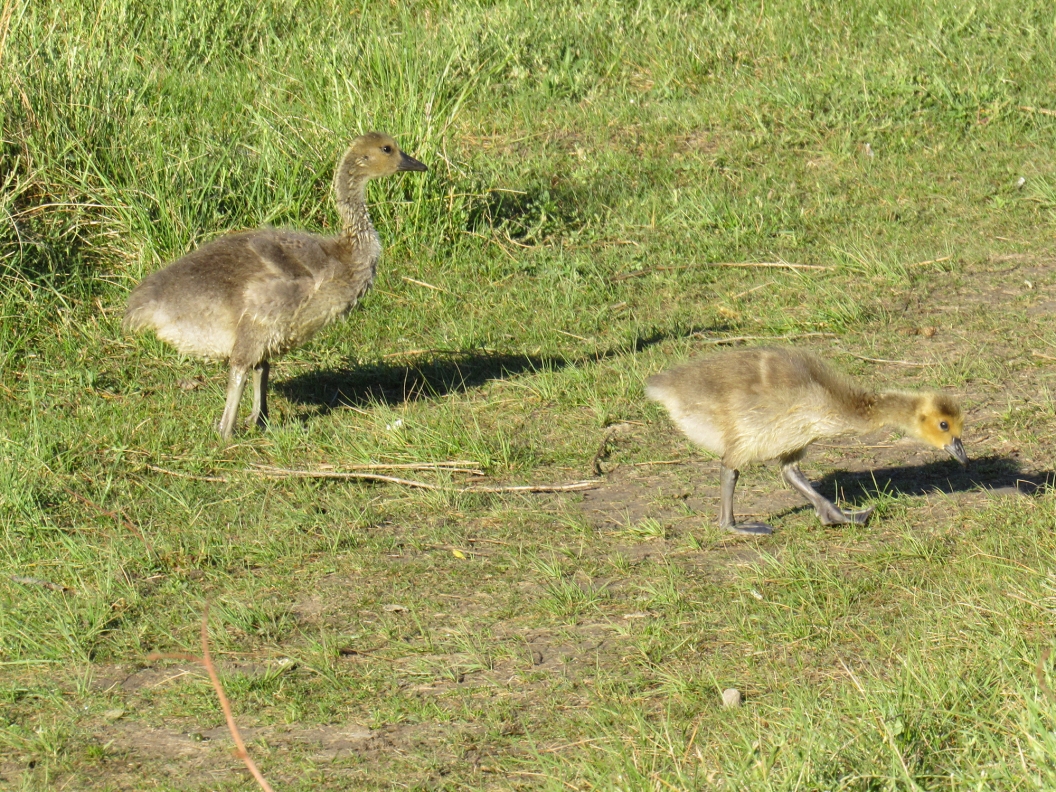 In the last photo, one of Gwyn’s goslings is bigger than the other. I had a theory when writing Part 3. Gwyn and George had 8 goslings and so did Gertie and Greg. For some reason, 2 of Gertie and Greg’s younger goslings wandered over one day and joined the Gwyn and George gaggle (other people have observed young goslings doing this). However, when looking through June and July photos of the goslings, I noticed that Gwyn and George had 3 younger goslings who were all clearly older than Gertie’s goslings. Where did these 3 goslings of intermediate age come from??? I did find a possible explanation, but first, let’s watch the goslings grow.

On the morning of June 4th, like many other mornings, the two goose families were on a northwestern grassy slope. Like on May 31st, Gwyn’s goslings were already grazing while Gertie’s goslings cuddled in the early sunshine.

Gertie’s goslings. I think the Yellow-headed blackbird in the background is a female (note the dark feathers on top of the head).

Gwyn, George and their goslings. 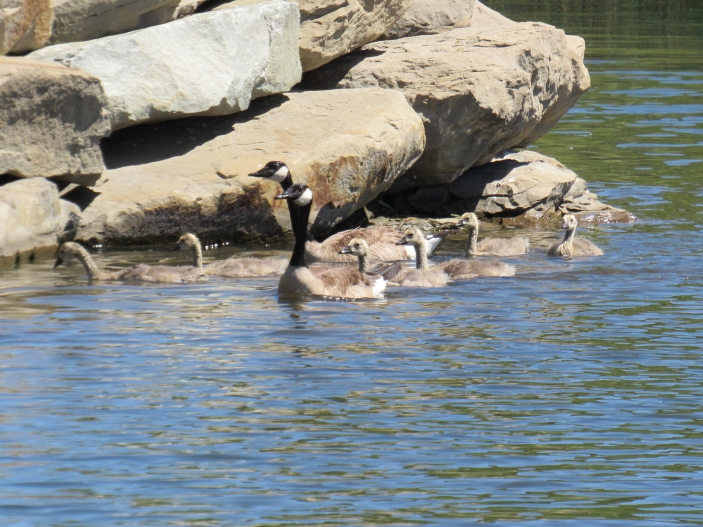 Gertie, Greg and their 6 goslings. 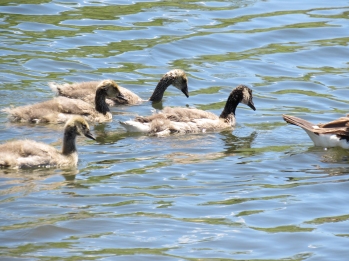 Six of Gwyn’s older goslings. They now have adult colours, but they are much smaller and still have some fluffy down.

On June 18th, I captured full family photos of both goose families and sadly, both families had lost one gosling; Gwyn now had 9 goslings, while Gertie had 5.

Gertie, Greg and their 5 remaining goslings. 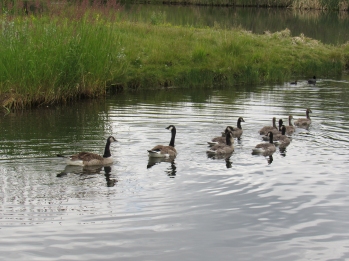 Gwyn, George and their 9 remaining goslings. 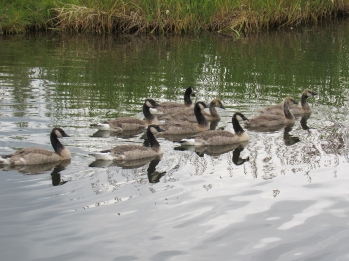 A closer look at Gwyn’s goslings. Six are older and three are younger. If you look at the full-size view of this photo and the first photo in this gallery, you will notice that Gertie’s goslings’ heads and necks are still fully beige while the heads and necks of Gwyn’s three younger goslings are starting to change to adult colours. (You will also notice Gertie’s black beauty spot on her white cheek.)

I didn’t visit the pond until a month later. There were so many breeding birds in June and July and so many different parks to explore!

A young Canada goose grazing in summer evening light. It now has adult feathers but it is still smaller than an adult.

Fifteen minutes later, the two goose families were swimming together in an interesting formation. Note that the adults have somewhat larger bodies and longer necks. Gwyn is the large one in the back; George is in front of a tight line of 7 of his goslings. I can’t distinguish between Gertie and Greg, but one of them is in front of George and the other is the frontmost and rightmost goose.

The geese are spreading out.

A few young geese swam by where I was standing.

Again, I did not visit the pond for another month. On August 20th, all the geese were gone. Gwyndolyn and George returned this year, in early April, when the pond had mostly finished thawing. On April 8th, J and I saw them, as well as another Canada goose couple. There was a fight, and George chased off the other geese. Two weeks later, I saw a goose nesting on the little island. I was passing through quickly and with no camera, but maybe it was Gwyndolyn.

And now, a little research about the three goslings of intermediate age. According to Birds of North America Online, the clutch size of Canada geese ranges from 1 to 9 eggs with 5 being the modal clutch size. But I didn’t read anything about Canada goose parents adopting the goslings of other parents. A little Google search, however, produced many articles about this behaviour. A May 2010 article in the Daily Mail mentions a couple of Canada geese rearing 40 goslings on the River Thames. According to Grahame Madge of the Royal Society for the Protection of Birds, Canada geese are well known for forming creches, groups of goslings from different parents. In May 2011, the Prairie Wildlife Rehabilitation Centre in Manitoba received a newly hatched orphaned gosling. Five days later, knowing that Canada geese readily accept orphaned goslings, they brought the gosling to a pond where a Canada goose couple had 5 goslings of approximately the same age. They were worried the orphan might have imprinted on humans, but it accepted its new parents and siblings, and vice-versa. A July 2013 post on the blog Birding is Fun supplied me with a likely explanation for where the three mysterious goslings came from. The author, Chris Petrak, describes the gosling adoption observations of Bernd Heinrich and John Anderson:

Bernd Heinrich (The Geese of Beaver Bog) noticed that his pair of Canada Geese disappeared with their six hatchlings after only a couple of days. Curious, observant, tenacious (he made notes for several years) and a little lucky, he discovered that his pair led their hatchlings through the woods to another larger pond with good grazing fields where they joined the resident breeders of that pond. The new pond was about three miles from his beaver bog. Other pairs also came to the new pond.

At the new pond, other goose dynamics took over. The six goslings of Heinrich’s pair were adopted by the resident geese, and his pair returned to his beaver bog…

John Anderson has been watching the resident geese on Sunset Lake for many years. A few years ago, two pair nested and hatched young. Not long after the hatching, he watched the resident gander attack the second gander who had had the gall to intrude on his lake. This was not a wing-flapping, goose-hissing confrontation, but an out and out physical fight. The second pair of adults left, and the resident pair adopted their goslings.

Looking back at photos of May 6th, when Gwyn’s goslings left the nest, there are no photos of 8 goslings. The most I can see are 7, but I decided that one was always hidden because I liked the symmetry of Gwyn and Gertie both having an 8-gosling clutch. Revised clutch numbers… Gwyn produced 7 goslings and Gertie produced 6. It is possible that the 3 goslings of intermediate age came from a third mother goose who nested nearby (U of C rooftop or a little island on the Bow River) and walked to the pond with her little ones and mate. The third adult pair was not welcome at the pond so they left.